Originally published on BC Ale Trail.

Last August, Victoria’s Lighthouse Brewing mourned the death of one of its co-founders, David J. Thomas. Now, the brewery is celebrating his life by releasing a special beer called Kapitan Czech Pilsner.

Born in Hamilton, Ontario, Dave Thomas studied Chemistry at Queen’s University in Kingston, and then Oceanography at the University of British Columbia. After graduation, he co-founded Seakem Oceanography, Ltd. in 1974, and that company evolved into several companies, including Axys Technologies, which still operates in Sidney today. He was Axys’ Chairman at the time of his death in August, 2020. (Read the full obituary here.) 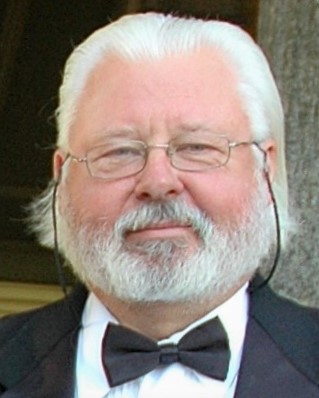 I caught up with his son, Ben Thomas, who is General Manager of Lighthouse Brewing, over Zoom, to hear about his father, Dave, and his legacy at the brewery as it releases a special Czech Pilsner in Dave’s memory.

“He grew up on a farm in Beamsville, Ontario. He was a pretty down-to-Earth dude even though he became very successful in his life, travelled the world and did all kinds of crazy things, but you’d never ever suspect it.”

Ben explained that his father “became the first person in his family to go to university, and probably the first high school graduate. He was the oldest child of pretty poor, uneducated, immigrant parents so that was a big deal. Education was always really important to him.”

While he was studying at UBC in the early 1970s, “That’s where his interest in arctic science really started. He met a couple of guys in grad school who formed a company called Seakem Oceanography. He joined them as a partner in 1975. At one point he helped set up a lab in the western Arctic. I actually went up there as a toddler with my mom for three months, but I don’t remember it at all.”

Through his work, Dave Thomas was “exposed to a lot of cutting-edge climate science so he was definitely on the forefront of knowing that this is real and that what happens on the Earth will present itself in the Arctic first. He really passionately talked about that a lot.”

“He was just a really fascinating guy, a brilliant man.”

So what’s the connection between this chemical oceanographer and the Czech Republic, a landlocked country in the middle of Europe?

Ben explained that when his dad’s company “started getting contracts in parts of Europe, like Russia, they needed a European laboratory. The Czech Republic was strategically located, and at that time in the ‘90s it had just become independent, so value for money was good. Everything worked out — the geographical location, plus they were able to do some things remotely and not have it cost a fortune like if they were to open up in Germany. And the biggest thing was there was already an existing laboratory there that was up to their standards.”

The satellite laboratory they were affiliated with was just outside of Prague “so he spent a lot of time there for work in the ‘90s. He just loved the culture and the people and the food and the beer. Everything Czech was great.” 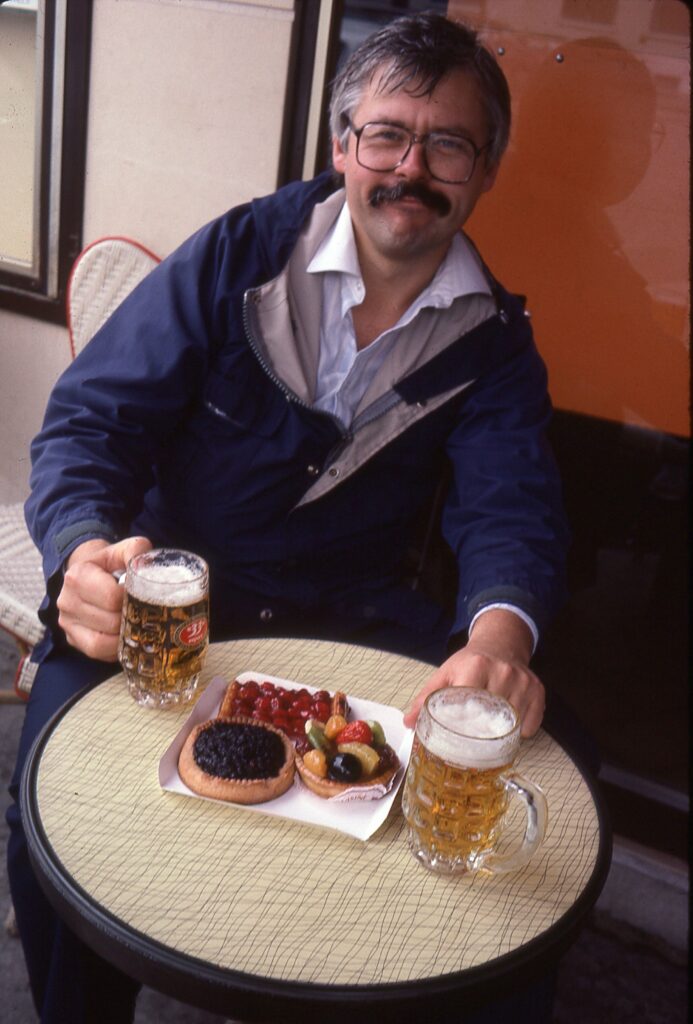 How did Dave get involved with a brewery?

“In the late ‘90s, he retired from his day-to-day job, but realized within a matter of weeks that all his friends still had jobs, and he couldn’t just stay home all day. He was really looking for something to invest in and participate in the growth of something like that. He always dreamed of having a winery. He loved beer, but he also really loved wine. There were a few winery options and then a proposal from some guys who wanted to start a brewery came across his desk and the rest is history.”

“He got in on the ground level with Gerry Hieter and Paul Hoyne. That was in August of ‘98 when we first started rolling kegs out.” Ben Thomas was himself just beginning his university studies, also at Queen’s, so he wasn’t around the brewery much himself at that point. “I was an unpaid ambassador for the brewery for the first 15 years.” In other words, he drank a lot of Race Rocks and encouraged his friends to do the same!

As for his dad’s involvement in the brewery, “He knew enough that he should leave that kind of thing to the guys who knew what they were doing, especially in the beginning when you only have three people actually working. He was definitely involved, actively knowing what’s going on, but it wasn’t like he was here in the brewery washing kegs or working on the packaging line.”

Ben’s own involvement began in January, 2013. “I washed kegs for a year and worked my way up, did sales, and then gradually took on more responsibility over time. I had a lot less stress when I was washing kegs, I’ll tell you that.” 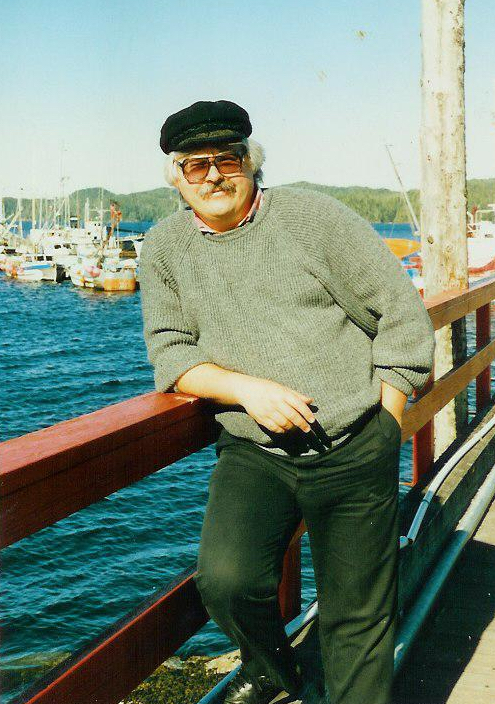 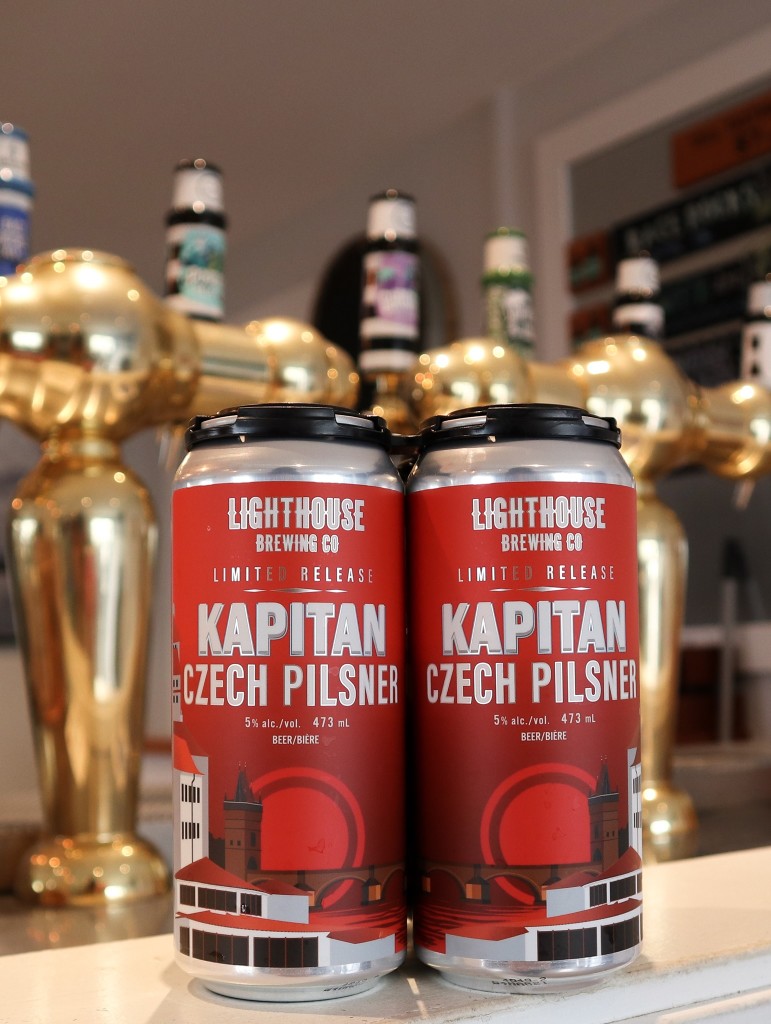 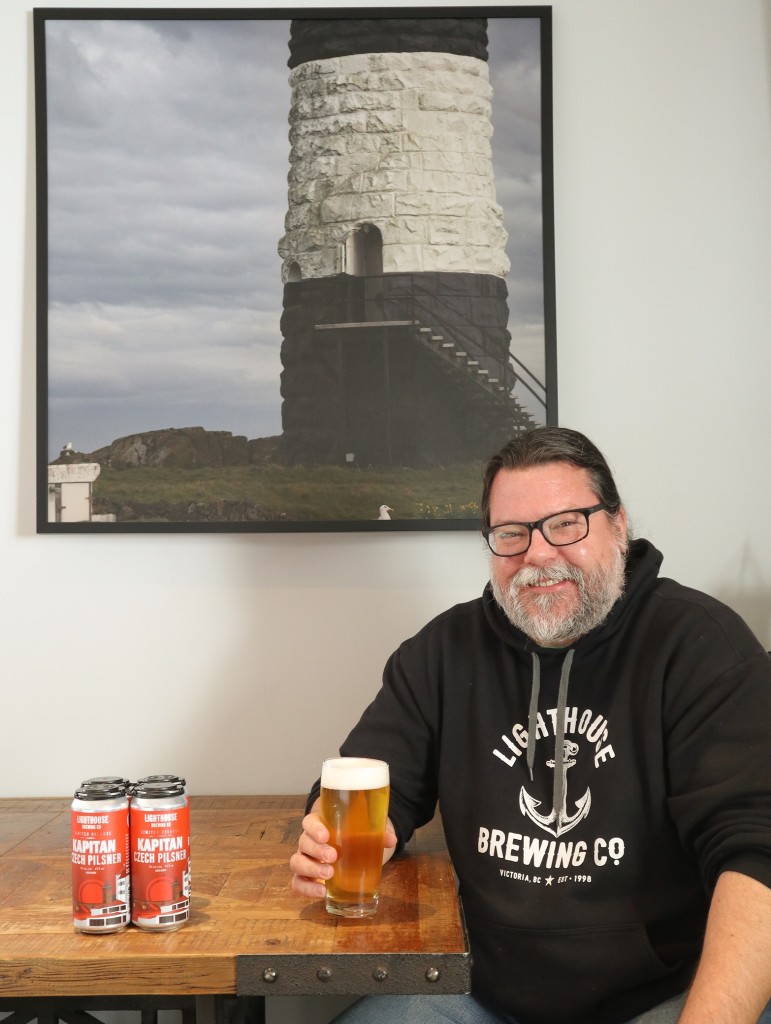 When Ben and his colleagues at Lighthouse were discussing options for making a special beer in his father’s honour, they decided to go with a Czech Pilsner, a style Lighthouse has never released before. Brewmaster Darrin Gano, who got to know Dave Thomas over the past several years, knew how important this beer would be to Ben.

“Darrin told me that of all the beers he’s brewed, he knew this was the most important, certainly to me,” Ben explained. “He puts everything he’s got into every recipe he makes — he wants every beer to be the best — but I think he felt a little extra pressure.”

The beer’s name evolved from Gano’s working title for his recipe: “The Captain.” Ben said he “did a google translate so that’s how we came up with Kapitan.”

In the end, after lagering it for more than two months, both Gano and Thomas are very happy with the results. “The beer tastes amazing,” Ben enthused. 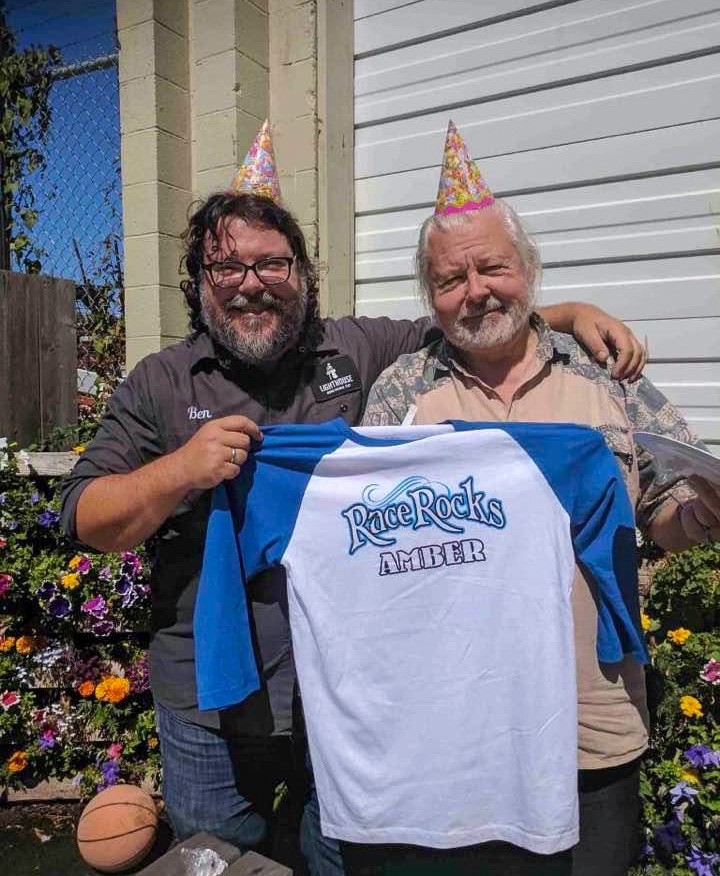 The Kapitan Czech Pilsner is also a benefit brew, supporting a variety of charities and causes that were near and dear to Dave Thomas’ heart.

“We’re doing 10,000 litres to start,” explained Ben Thomas. “The hope is that this becomes a popular enough beer that it can become one of the cores. Plan B is that it is the first of a series of legacy beers, each one being that benefit brew, where we will cycle through different styles.”

“We decided we were going to donate a portion of all the proceeds to some of the charities that my dad was involved in, mostly to do with arctic or climate science, because that was his focal point as a scientist.” Lighthouse will also provide some grants to students in those fields of study. “The arts was also something my dad was really big into supporting, specifically the Victoria Symphony, Pacific Opera Victoria, the Art Gallery.” 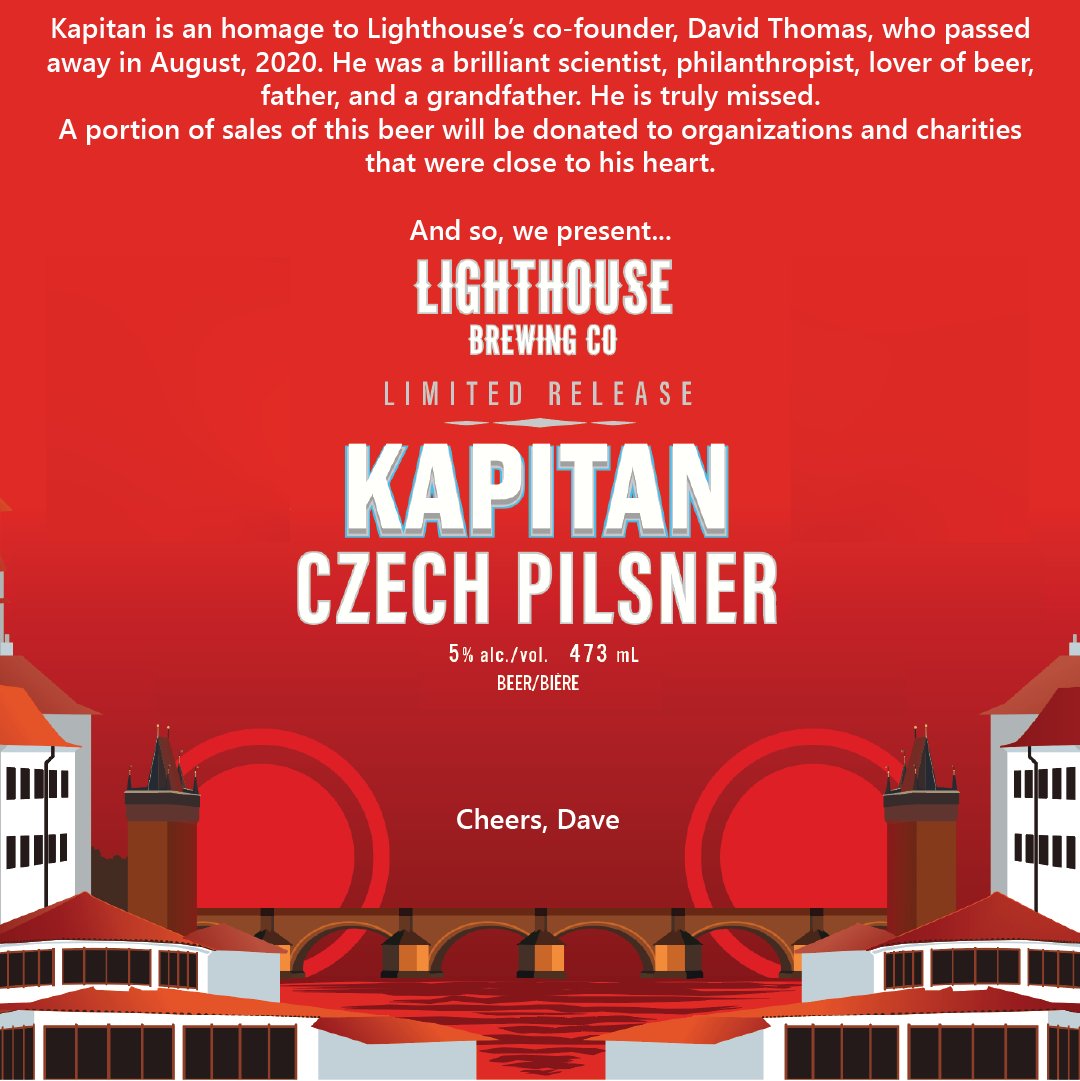 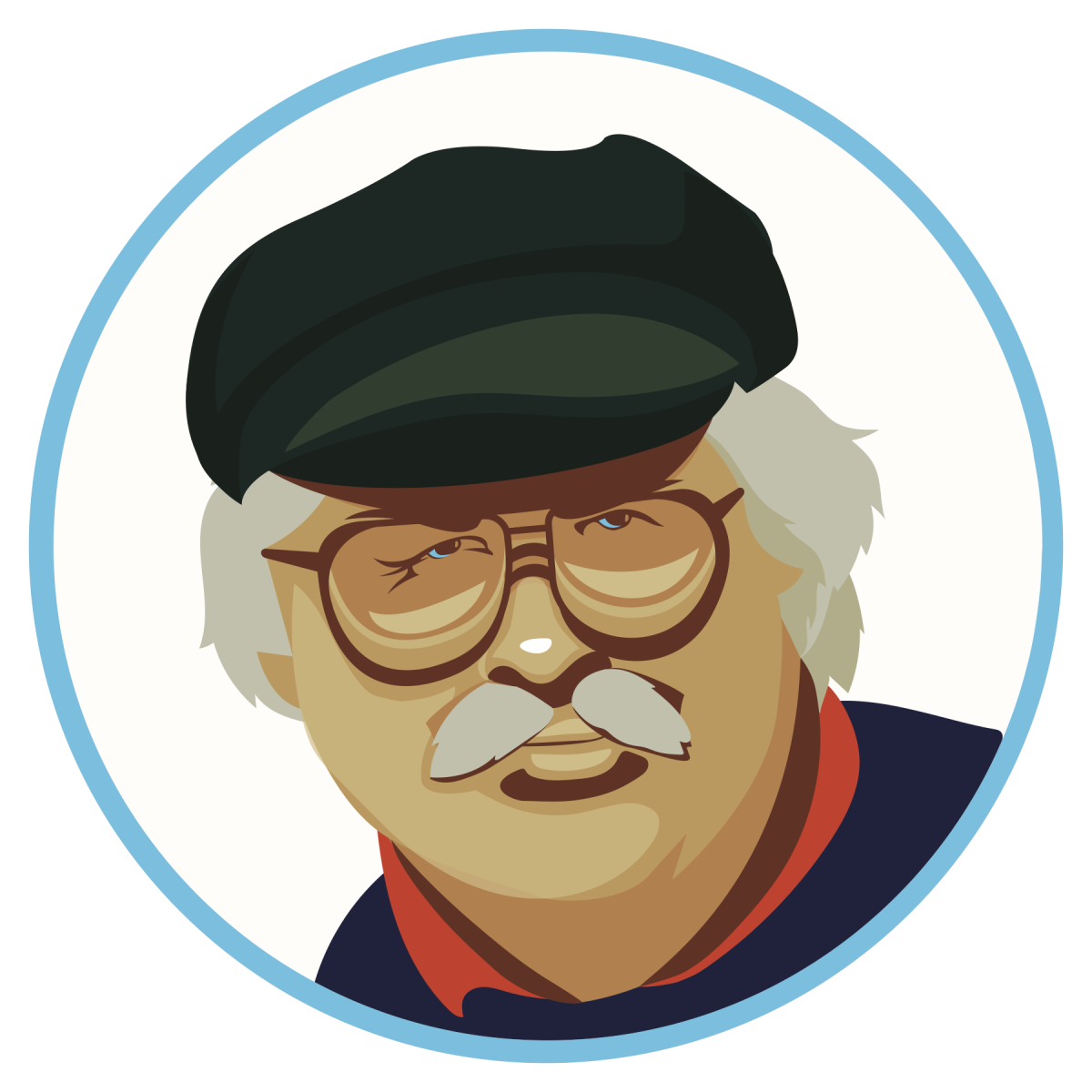 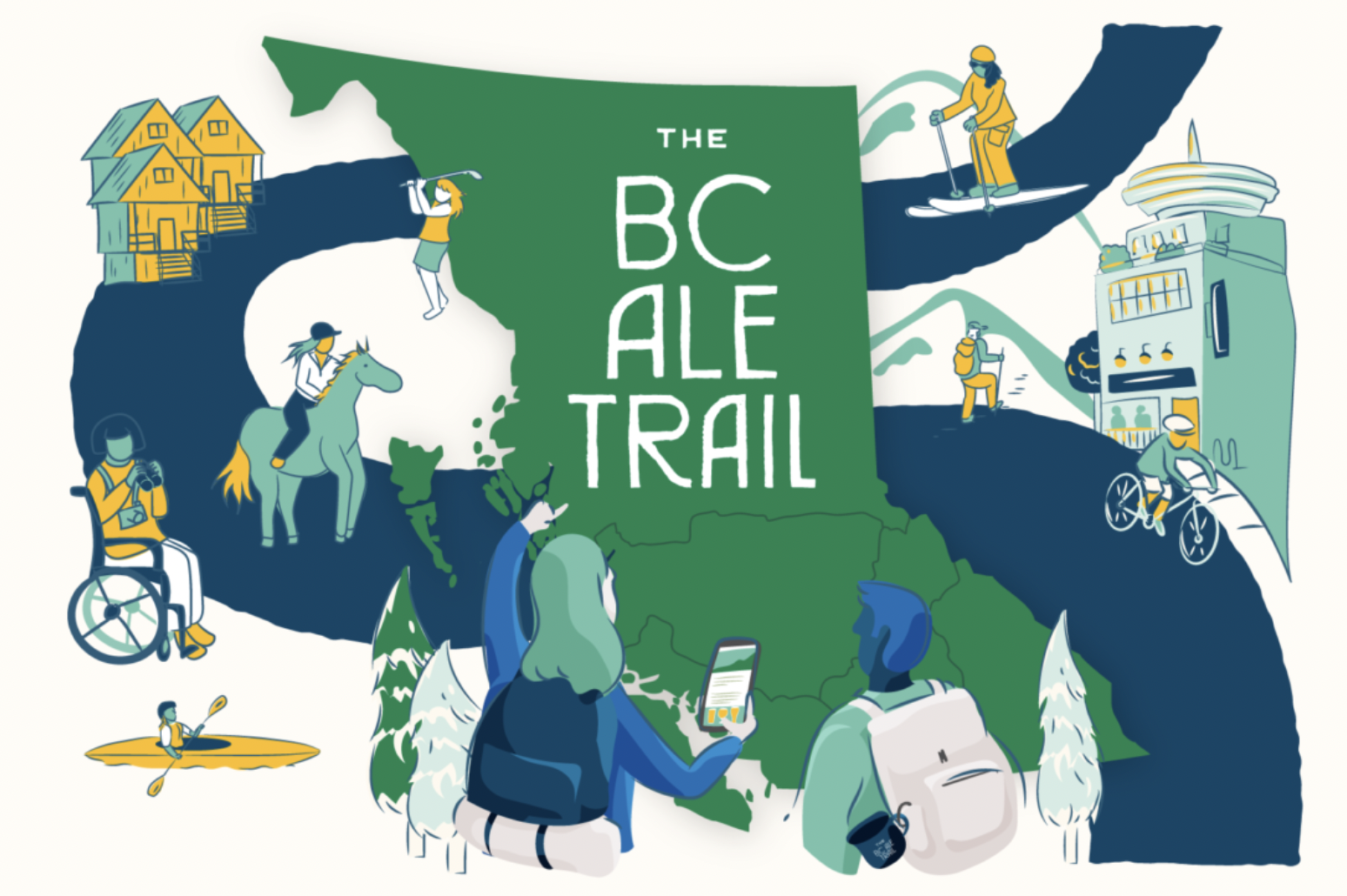 New Experiences Are Brewing Nearby