From the interwoven communities of the Comox Valley to Campbell River, the Central Island is bursting with food-passionate folk. There’s no doubt the pandemic has hit many of the restaurants here hard. But, like in Victoria, the communities are supportive beyond belief of their local eateries.

It’s not easy to be a restaurant owner right now, especially when starting up a new venture in a new market. But, for many, it’s worth it.

Two of those people are Ryan and Katrina Gark, the owners of one of Campbell Rivers newest restaurants, Mattone Italian Kitchen.

Ryan grew up in Campbell River, where he spent many days baking up a storm with his mom and grandmother.

“That’s where my passion for cooking started,” he said. “Every time I’d go over to my Gramma’s, there would be a freezer full of treats and goodies she’d always send you home with and a couple loaves of bread.”

At 19, he left for culinary school in Vancouver before kick-starting his career. He cooked all over the world in places like Honolulu, Portugal, Tofino, and, most recently, Caesars Palace in Las Vegas.

In 2014, he applied to be on Chopped Canada and came out as champion.

“The experience was amazing and gruelling,” he said. “It was a 15-hour day in the studio where they just put you through the wringer, but I came out the other side as a winner so that was really great.”

Katrina comes from an Italian family in Burnaby. She grew up going to the Italian markets around the city and making pizzas and paninis at nonna’s house.

So, when the opportunity came to open an Italian restaurant in Ryan’s hometown, they jumped on it.

When the family moved back from Las Vegas last year, Ryan had applied for a head chef position at the former OX Chop House. But OX’s owners ended up deciding to sell, so Ryan and Katrina bought it instead. On March 3, 2021, they opened Mattone Italian Kitchen.

I managed to eat at Mattone just a couple of days before the health restrictions shut down indoor dining. But when we’re able to eat in again, diners can enjoy a lively atmosphere with great social distancing measures. Wood barriers create protective but warm booth-like areas. A long, open concept bar gives you a great view of the action in the kitchen. 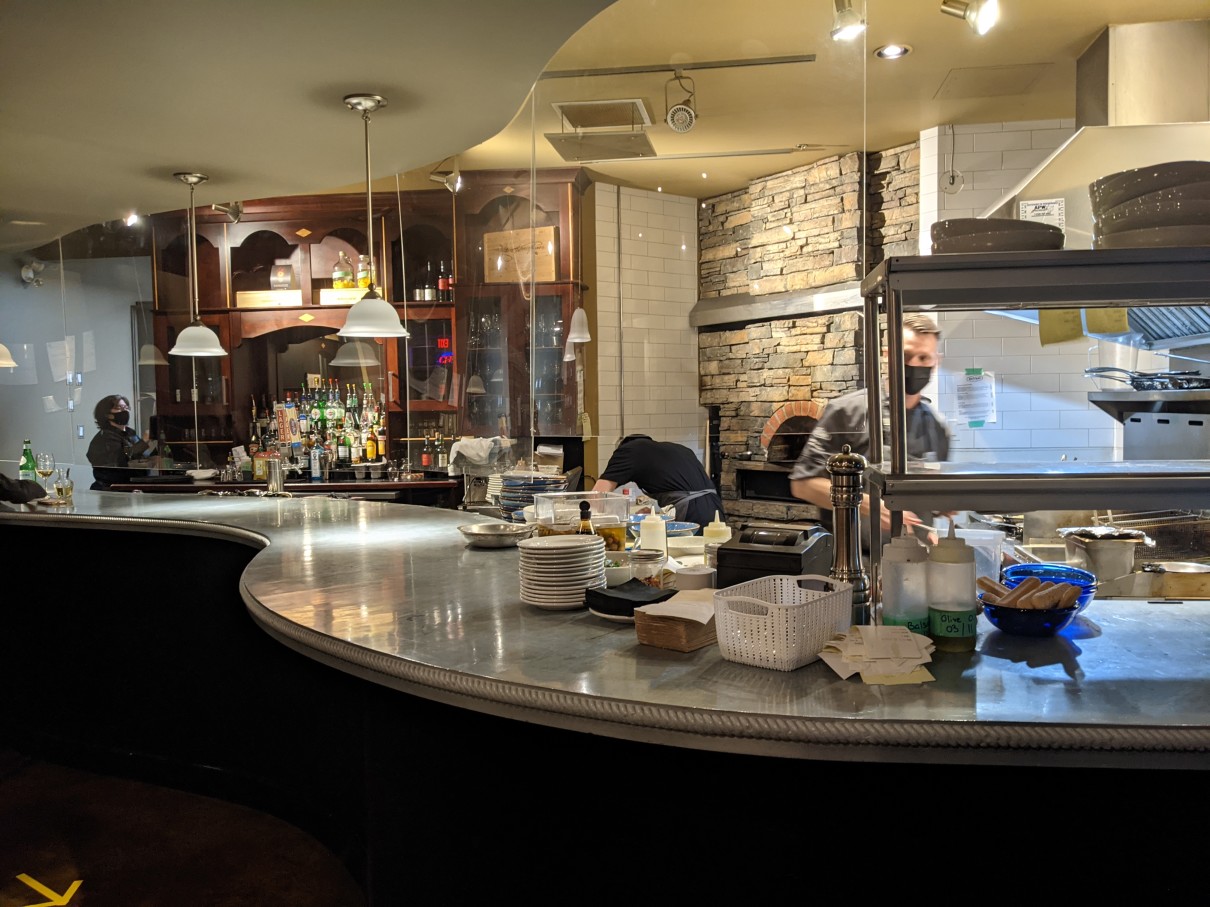 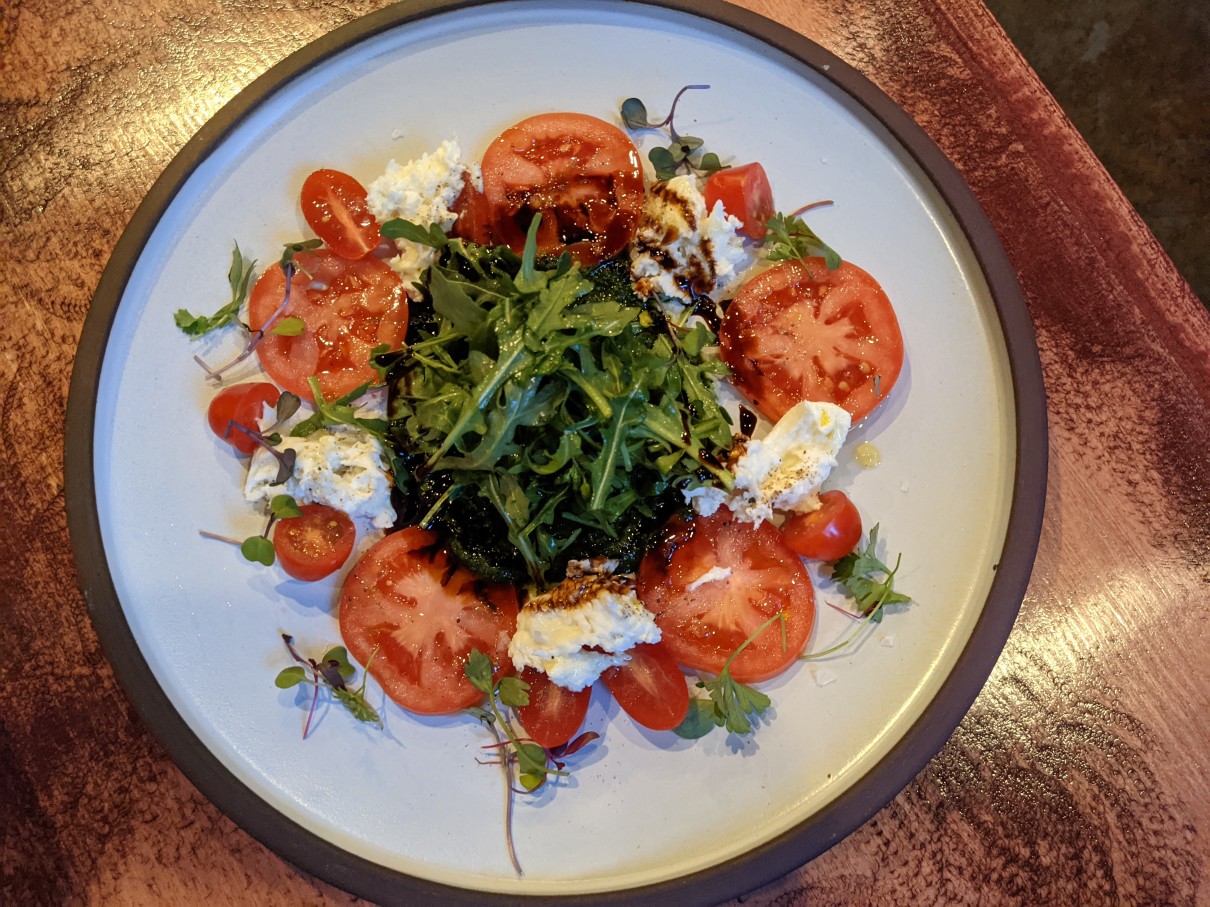 Then there are the Forno oven pizzas, made from the dough recipe Ryan has been perfecting at home in his own pizza oven and in the various restaurants he’s worked at. The result? A delicious crust that’s the perfect mix of soft and crispy, topped with things like roasted wild mushrooms, local seafood, or dry-cured pepperoni. 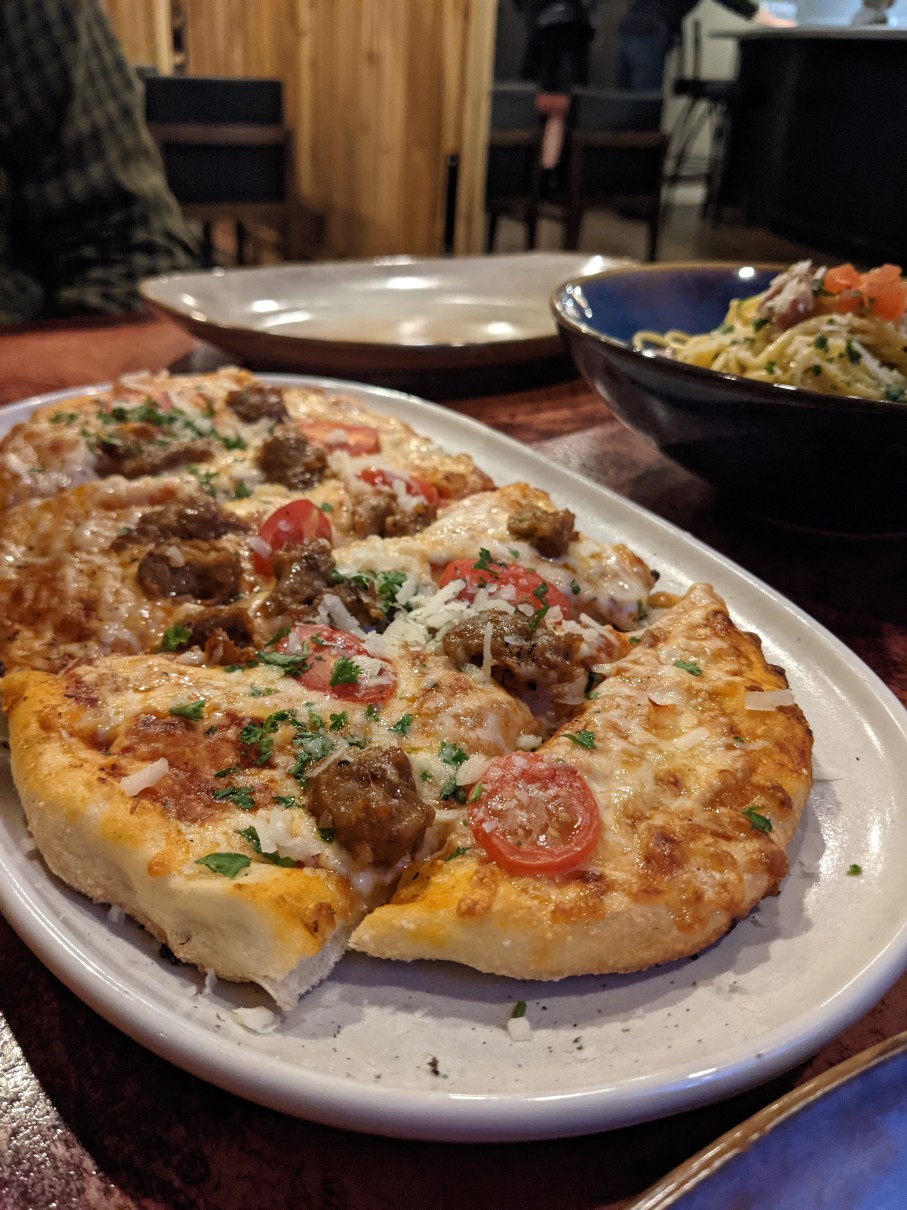 Their fresh pastas include a lip-smacking carbonara and a clam linguine with local clams from Outlandish Shellfish. If you’re looking for a real treat, try one of the mains like the chicken parmesan complete with pesto linguine, the lobster or mushroom risotto, or the steak gremolata. 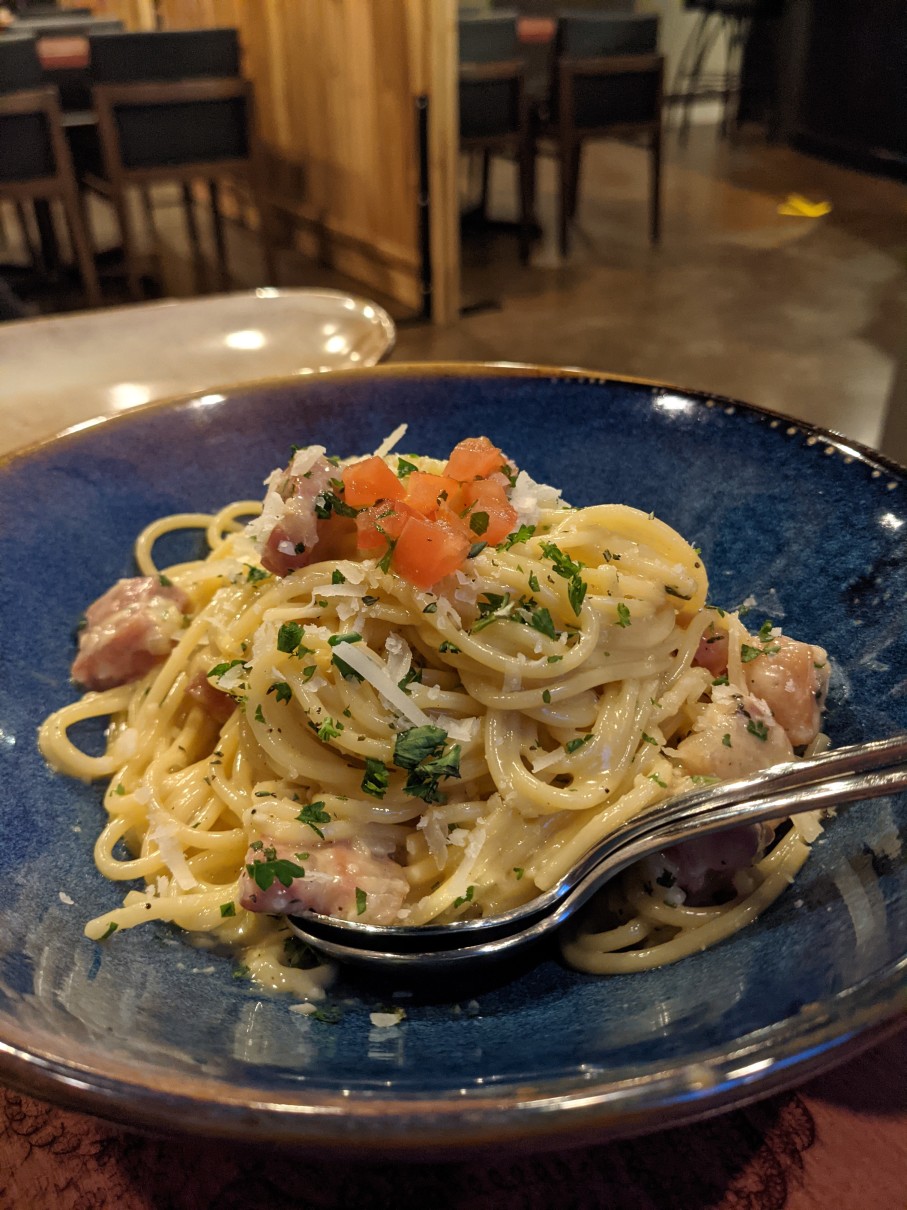 We struggled to decide which of the desserts to try, but an Italian restaurant wouldn’t be complete without a killer tiramisu. And it did not disappoint. Top it all off with a strong “Matt-groni,” featuring local bourbon barrel-aged gin from Courtenay’s Wayward Distillery. 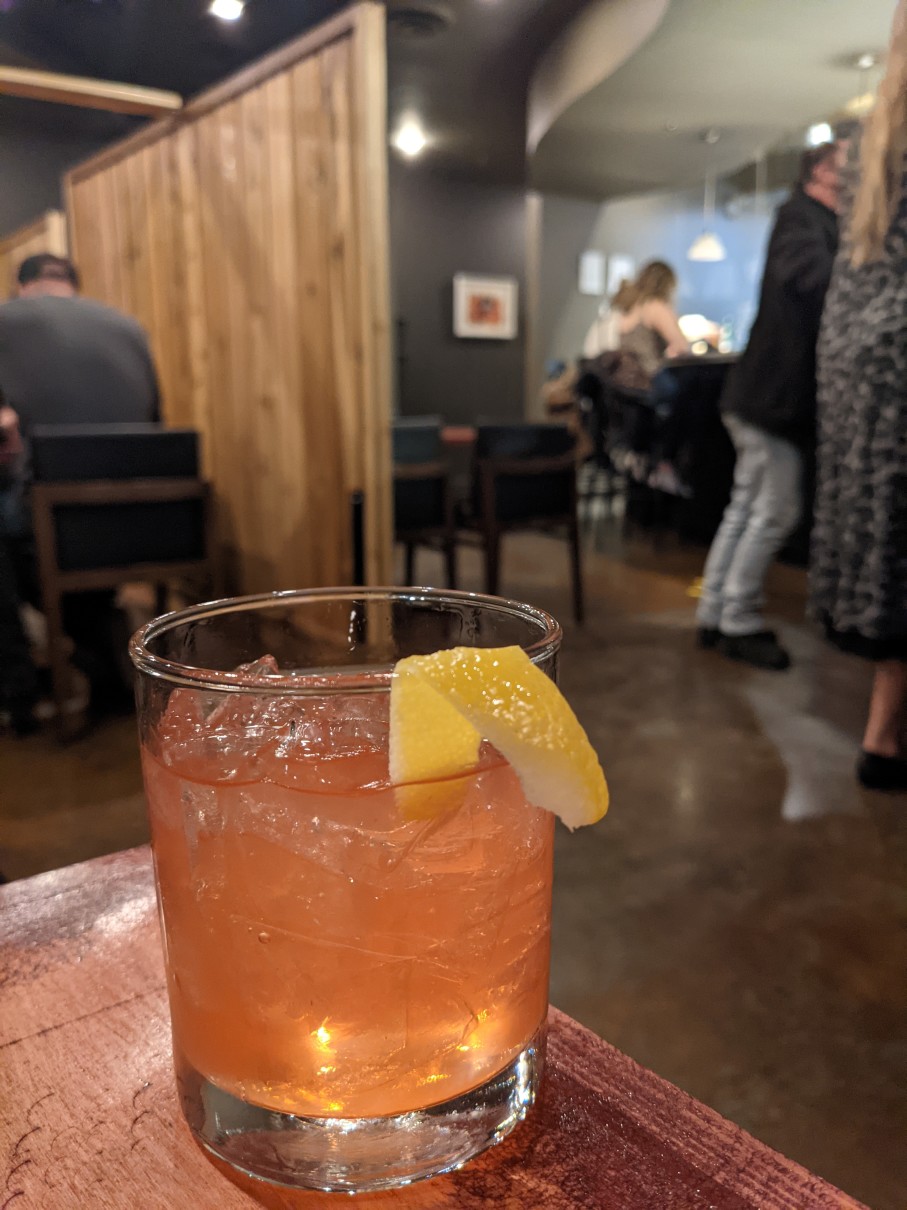 There’s no doubt COVID has caused some struggles for Mattone, as it has for most restaurants, but Ryan says they’re gratefully feeling the love from the community. They also just opened a patio so locals can now dine in the sunshine or order takeout for the time being.

Pandemic or not, Ryan says it’s hard to beat the Island, both for the support that comes from the people and the ingredients that come from the area.

“There’s such a great food scene on the Island,” he said. “The close proximity to seafood, oysters, clams, mussels, Dungeness crab—it’s all right here. We go down to the dock sometimes and buy halibut right off the boat. Or spot prawns and sidestripe [shrimp].”

Ryan also says he’s a big dreamer and would love to eventually have a couple of locations in Courtenay or Nanaimo.

“All in all, though, I’m super excited to serve my hometown with great food and beverage,” he said. “My high school is just up the road and I show my kids where I used to run around as a kid and a teenager. It’s really cool to be back, I’m feeling super nostalgic.”

If you live in Campbell River, order takeout or snag a seat on Mattone’s patio Tuesday to Saturday between 4:30 to 9pm. Now isn’t the time for Victoria locals to visit Campbell River, but, when it is, come hungry. In the meantime, follow Mattone on Instagram so you can start collecting inspiration for your next North Island trip when it’s safe to do so.