The King of Market Square: The Making of Los Panas Kitchen

It’s a busy summer afternoon at the historic centre of Market Square in downtown Victoria. Down in the lower courtyard, people line up to grab a seat on the patio of local brewing company Whistle Buoy. With the brewery’s varied selection of drinks and surrounded by food pop-ups, the crowd sits back and soaks up the sun. A tricolour food cart stands in the left corner of the patio, showing off the vivid red, blue, and yellow colours of the Venezuelan flag.

Every Friday and Saturday afternoon, Los Panas Kitchen set up and open up their business to serve authentic Venezuelan arepas. When people approach the cart, Carlos Bermudez greets them with a big smile, as warmly and excited as if he were meeting old friends. When he’s taking an order, Carlos takes the time to go over the menu with customers, making sure they know about the ingredients of each arepa, the sauces, the gluten-free options, and which arepa he recommends they try out first. Once their order is ready, he brings it to their table and wishes them a great meal. Carlos’s smile never leaves his face when he’s at work, whether it’s taking orders, serving arepas, or talking with friends turned clients and clients turned friends.

The protagonist of the evening, the arepa, may look like a simple dish, but its versatility, flavour, and accessibility bring friends, families, and new customers together at the table. A round, flat patty made of maize, the arepa is indispensable and venerated in the Venezuelan gastronomy. Its filling it’s just as important--it defines the whole dish and may be special depending on the occasion. It can be as simple as it can be multi-layered; salty as it can be sweet. The “Snobbie,” the “Blackjack,” and the “Queen” are all great arepas; but it’s the “King,”—the most popular—the one that rules the Market Square courtyard. 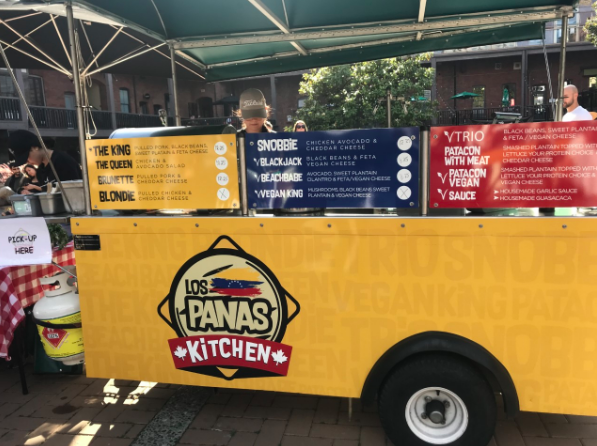 Carlos’s journey is one more story that joins the anthology of the immigrant. Leaving behind the country that raised him in search of life opportunities, the Venezuelan accountant and food lover took a bet and left his beloved home behind in search of a new, safe life. He arrived in Canada six years ago, facing the great challenges of not knowing any English and finding his way around a city he’d never been in before. Once settled in Toronto, however, Carlos began dreaming about starting a business of authentic Venezuelan food. He developed his love for cooking at fifteen years old, when his mom was sick and he would help her out in the kitchen. “Making rice would take me an hour or more, as I had to go back and forth between the kitchen and my mom’s bedroom to make sure I was following her instructions right. Don’t even ask how long it took me to make chicken!” Carlos remembers this period fondly.

“It was then that I became interested in cooking. I never studied it, but I had the best professor.” His culinary dream, however, had to wait. Coming to Canada and investing in English lessons cost Carlos all his savings. It would be a couple of years later in Vancouver where Carlos’s life stabilized and he began building the foundations for his dream. “I started a small base with the help of my best friend Dinah, without whom Los Panas Kitchen wouldn’t exist. She’s been my support all the way.” On and off, Carlos worked on his project, and after three years, the dream started to become a reality. He moved to Victoria, where he made important connections that motivated him to see this dream through to the end.

When people line up to order from Los Panas Kitchen, they can’t help but be curious and get excited about the food Carlos presents. There’s pride in the way he talks about his country’s traditional dish. “I used to invite friends over to my place and make arepas for them--everyone loved them. Definitely hearing and seeing their satisfaction when they ate my food made me happy, and it now makes me feel that all the hard work behind this project is absolutely worth it.” 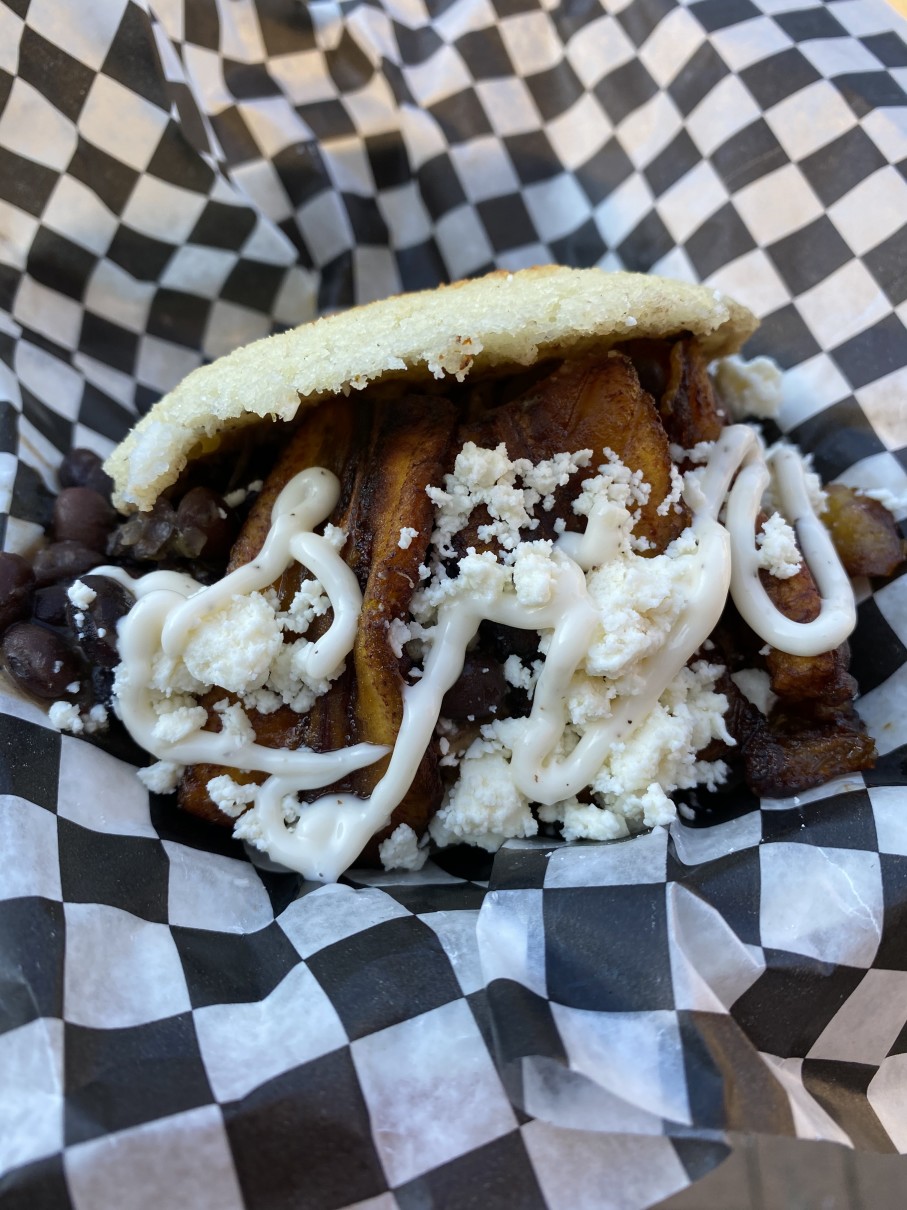 As a good host, Carlos introduces his traditionally made arepas with a touch of Canadian fusion. “Arepas are one of the most delicious and easiest dishes to make in Venezuela, and they’re definitely worth introducing to the rest of the world.” Los Panas Kitchen offers an inclusive menu that caters to meat lovers, vegetarians, and vegans alike. One of the most popular and beloved arepas in Venezuela is the ‘Reina Pepiada.’ Named after the young Venezuelan Miss Universe of 1955, the Queen is royalty amongst the other arepas. Using clever wordplay, Carlos changed the names of the arepas and translated some of them for the Canadian market. “I wanted to add my favourite arepa to the menu, the traditional ‘Pabellón,’ so I changed its name to “The King” so it could complement the Queen on the menu.” Similarly, the arepa ‘Dominó’ has its name changed to ‘Blackjack.’

This menu is accessible to those who have never tried arepas before, but it’s also familiar and traditional enough for the people who want a bite of home. Carlos incorporated new ingredients that are popular and beloved among Canadians. “The King and the Brunette arepas are traditionally made with pulled beef, but knowing how popular pulled pork is in Canada, I decided to adapt the King into something that would resonate with Canadians who’ve never tried arepas before.” So it’s the case with the guasacaca, a sauce very iconic from Venezuela, one that Carlos has combined with maple syrup to create a fusion between Canadian and Venezuelan cuisines. 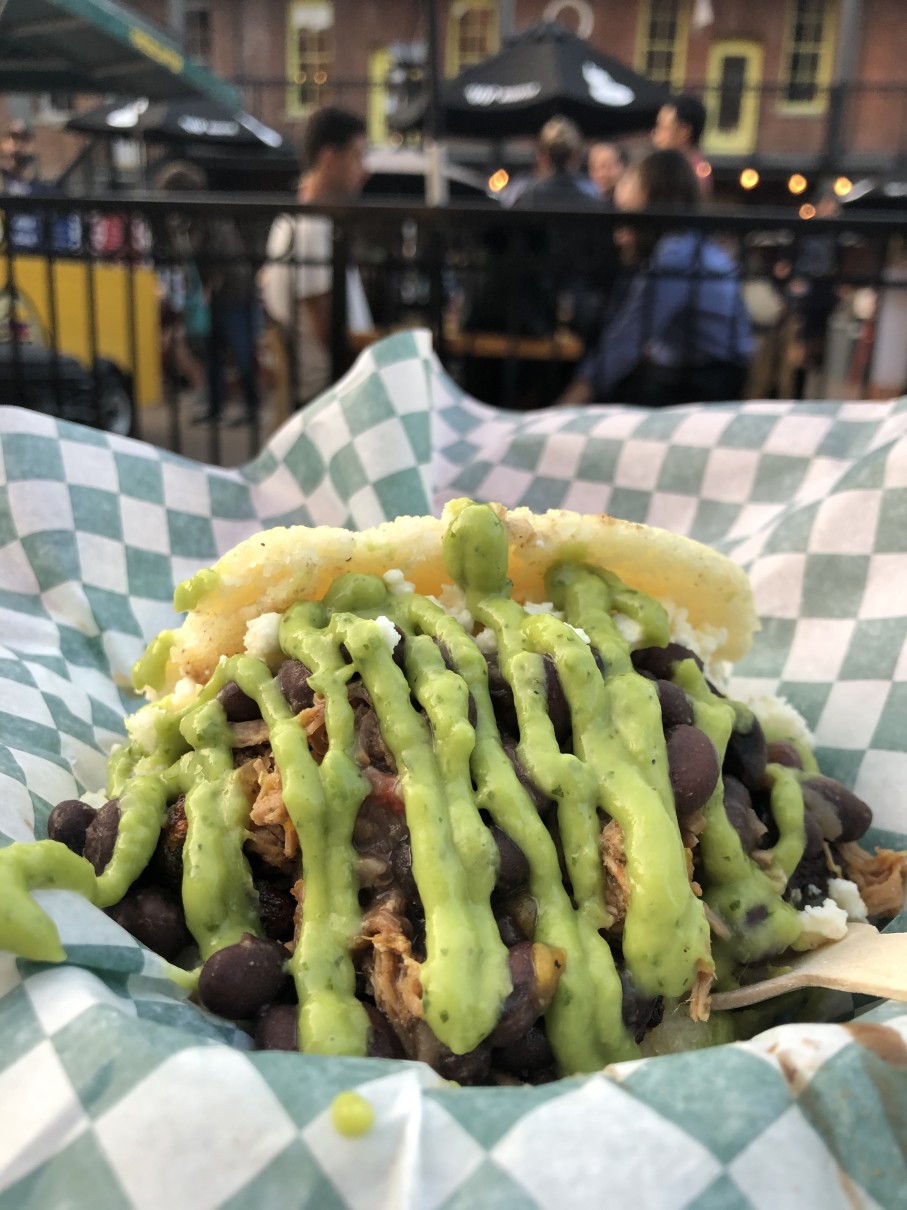 Los Panas Kitchen is a huge success in Market Square. People have come over to enjoy the open air, refreshing drinks, and the Venezuelan feast that is served in this part of downtown Victoria. More than a success, the booming of Carlos’s food truck is a sign that he’s on the right track, that he’s won the bet he waged many years ago. “I feel proud every time that I see a client come back to the food cart—it makes everything worth it.” 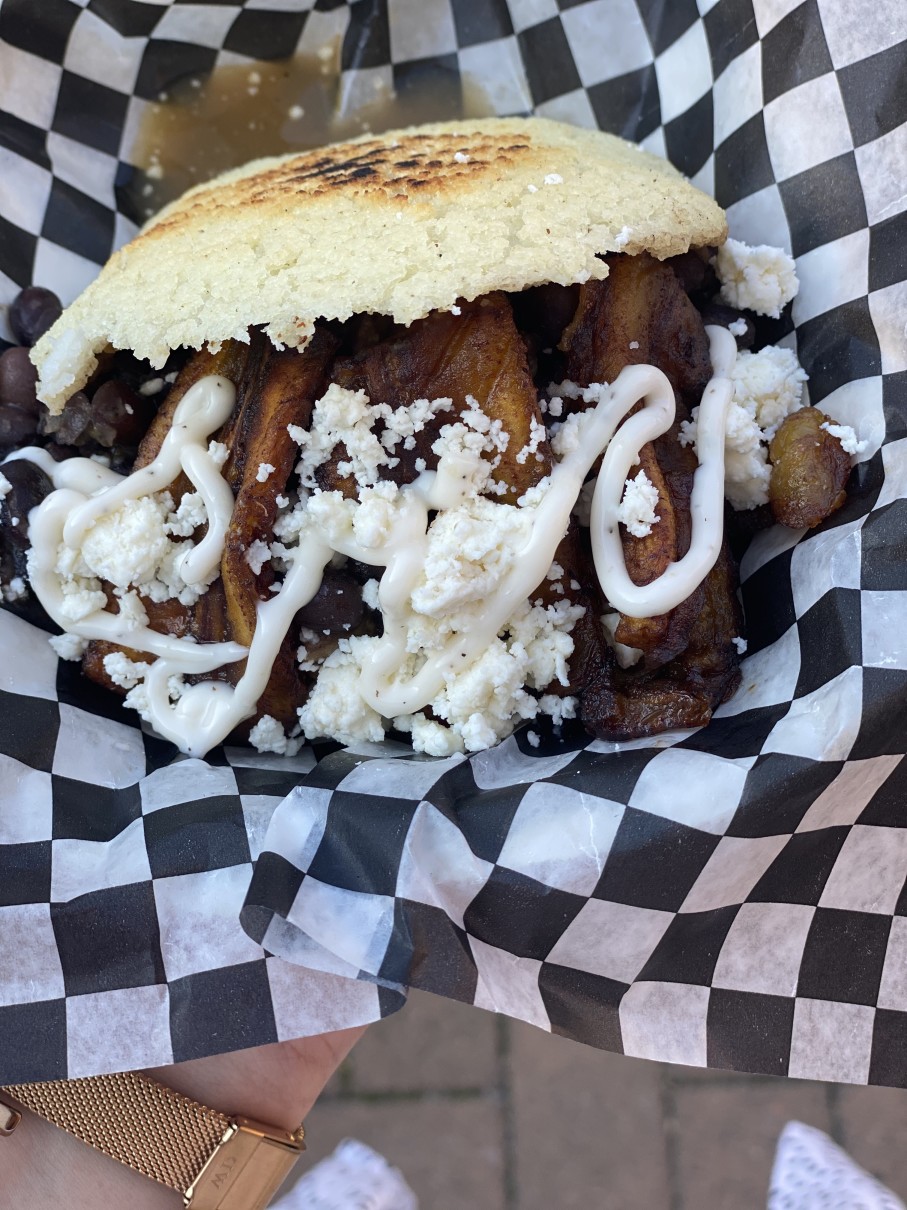 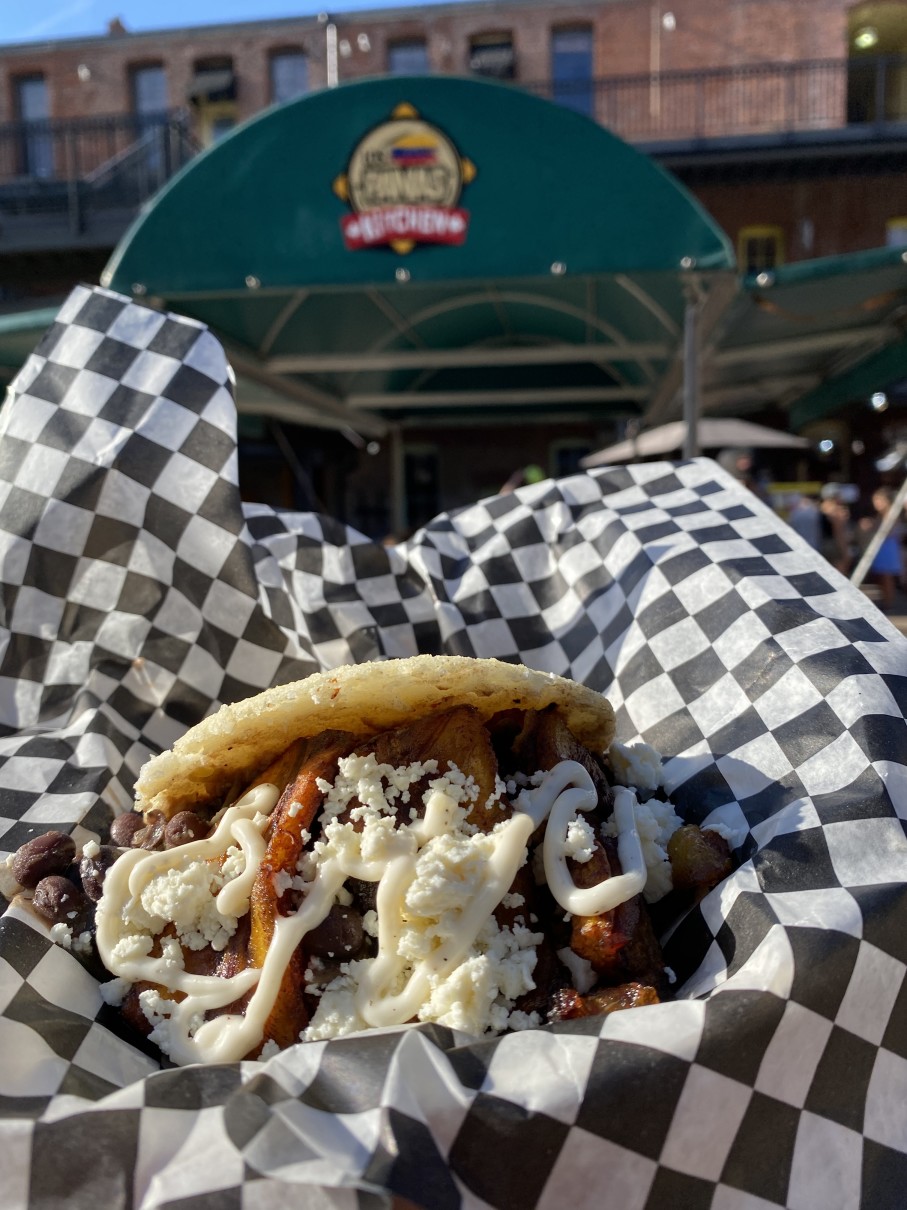 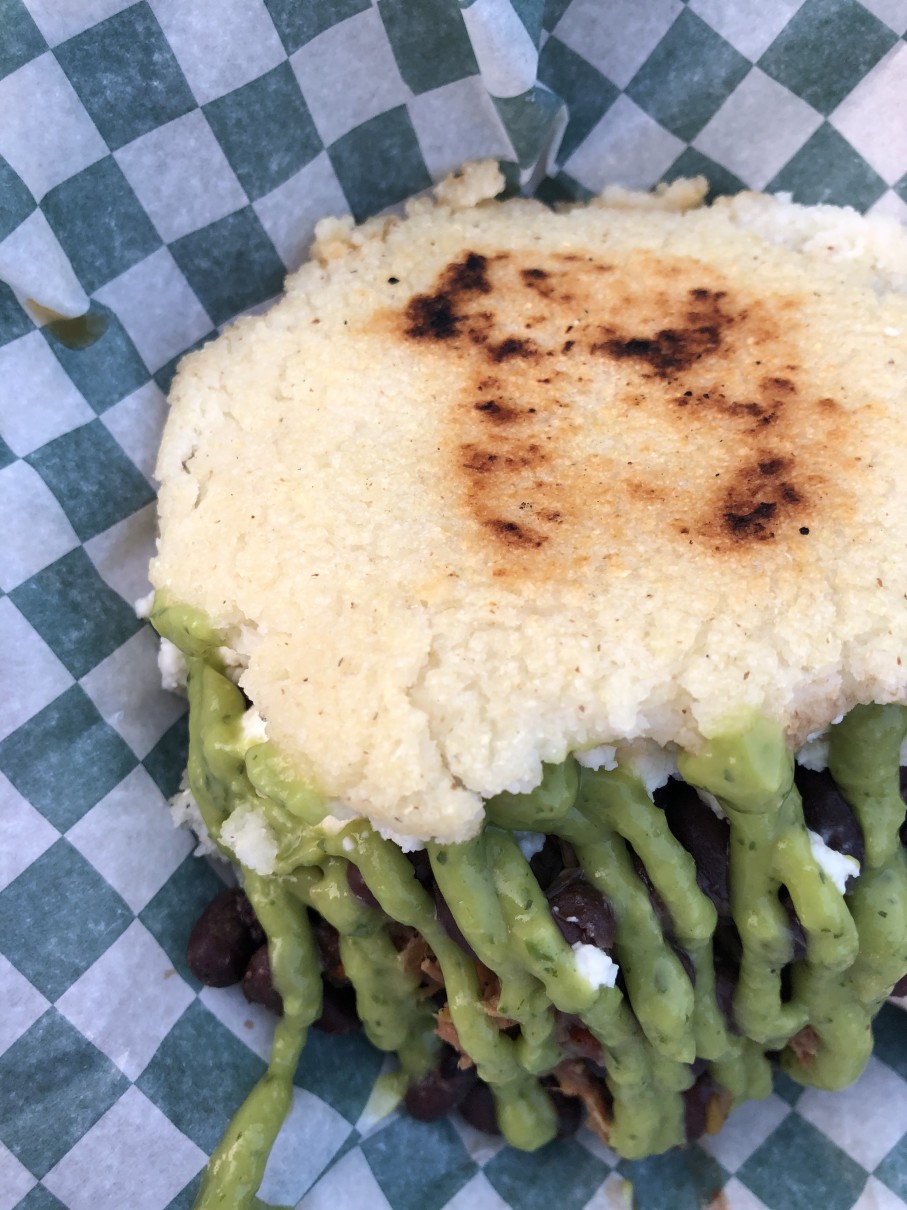